THE HARDEST WORKING PART OF MY BIKE, is also the hardest to spell.  We say it all the time.  But, can you spell it?  I can’t.  Not with confidence.  Spellchecking is always required on this one, for me.

Being a fairly new component, newer than the wheel or the handlebar or the saddle, it’s name hasn’t morphed into a million different languages.

It has to do with getting a train off it’s tracks.

The inventor was French, which might ‘splain a ting er two – an author, no less.

Derailleur is a French word, spelled dérailleur in French,[1] derived from the derailment of a train from its tracks.[3] Its first recorded use was 1930.[1][4] At least one notable bicycle industry author has attempted to promote the anglicized spelling of derailer.[3][5] As of 2013, however, neither Merriam-Webster[4] nor the Oxford English Dictionary[1] has an entry for derailer. 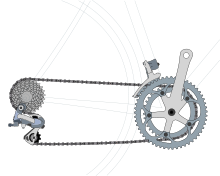 A modern road bicycle drivetrain with front and rear derailleurs

Various derailleur systems were designed and built in the late 19th century. One example is the Protean two-speed derailleur available on the Whippet safety bicycle.[6] The French bicycle tourist, writer and cycling promoter Paul de Vivie (1853–1930), who wrote under the name Vélocio, invented a two speed rear derailleur in 1905 which he used on forays into the Alps.[7] Some early designs used rods to move the chain onto various gears. 1928 saw the introduction of the “Super Champion Gear” (or “Osgear”)[8] from the company founded by champion cyclist Oscar Egg, as well as the Vittoria Margherita; both employed chainstay mounted ‘paddles’ and single lever chain tensioners mounted near or on the downtube. However, these systems, along with the rod-operated Campagnolo Cambio Corsa[9] were eventually superseded by parallelogram derailleurs.

In 1937, the derailleur system was introduced to the Tour de France, allowing riders to change gears without having to remove wheels. Previously, riders would have to dismount in order to change their wheel from downhill to uphill mode.[10] Derailleurs did not become common road racing equipment until 1938 when Simplex introduced a cable-shifted derailleur.

In 1949 Campagnolo introduced the Gran Sport, a more refined version of the then already existing, yet less commercially successful, cable-operated parallelogram rear derailleurs.[11]

In 1964, Suntour invented the slant-parallelogram rear derailleur, which let the jockey pulley maintain a more constant distance from the different sized sprockets, resulting in easier shifting. Once the patents expired, other manufacturers adopted this design, at least for their better models,[12] and the “slant parallelogram” remains the current rear derailleur pattern.

Before the 1990s many manufacturers made derailleurs, including Simplex, Huret, Galli, Mavic, Gipiemme, Zeus, Suntour, and Shimano. However, the successful introduction and promotion of indexed shifting by Shimano in 1985 required a compatible system of shift levers, derailleur, sprockets, chainrings, chain, shift cable, and shift housing.[13]

Today Campagnolo, Shimano, and SRAM are the three main manufacturers of derailleurs, with Italian manufacturer Campagnolo only making road cycling derailleurs and Shimano making both road and offroad. American manufacturer SRAM has been an important third, specializing in derailleurs for mountain bikes, and in 2006 they introduced a drivetrain system for road bicycles.

The major innovations since then have been the switch from friction to indexed shifting and the gradual increase in the number of gears. With friction shifting, the rider first moves the lever enough for the chain to jump to the next sprocket, and then adjusts the lever a slight amount to center the chain on that sprocket. An indexed shifter has a detent or ratchet mechanism which stops the gear lever, and hence the cable and the derailleur, after moving a specific distances with each press or pull. Indexed shifters require re-calibration when cables stretch and parts get damaged or swapped. On racing bicycles, 10-gear rear cassettes appeared in 2000, and 11-gear cassettes appeared in 2009. Most current mountain bicycles have either two or three front chainrings with single ring front setups becoming increasingly popular. Most road bicycles have two chainrings, and touring bicycles commonly have three.

Check It Out
Liquid error: Could not find asset snippets/tip-jar-js.liquid